For the most part, getting directions from one campground to another is easy. We compare the results from our GPS, Google and Apple Maps and pick the route that appeals to us more than the others. The problem was that our navigational systems all agreed on two alternative routes. Their preferred route took us to Atlanta, a terrible city to drag Rosie, our Airstream trailer, through. The second route went through the north Georgia mountains on two-lane roads with an abundance of sharp switchbacks. We were not comfortable with any of these routes.
Our fears about the mountain route were confirmed when we called the Top of Georgia Airstream Park near Helen, Georgia. The person there strongly urged us to avoid the road north of Helen while pulling our trailer then she made a few suggestions on how to go to our next campground. That was when we called our neighbor.
Who is our neighbor? He is a retired Air Force Lieutenant Colonel who served as a navigator. He quickly got out his maps and came up with the flattest route that avoided Atlanta and small mountain roads. I was able to load his route into our RV GPS and we knew we didn’t have to worry about how to get to our next campground.
We did have something else to worry about. As we were pulling out of our site at Pointes West Army FamCamp, our tire monitor alarm went off. One of Rosie’s tires was flat. We pulled off the side of the road in the campground trying to figure out our next move.
That was when a retired U.S. Marine Corps Gunnery Sergeant camping next to us walked over to help. He suggested that we use our air pump to fill the tire instead of trying to change it in the campground. Then we could keep an eye on the tire monitor as we headed to a tire shop. That sounded good to us.
I noticed as I started to remove the tire monitor sensor from the problem tire that it was loose and leaking air. After I filled the tire with air, I made sure the sensor was tightly secured on the tire.
We closely watched the tire monitor as we started our trip and were relieved that the tire behaved normally and didn’t lose any air. The Gunnery's advise was spot-on.
Our next campground was in Blue Ridge, Georgia. This is a destination campground for many vacationeer's, but we were here to visit my wife's brother. The COVID pandemic forced a two year gap in being able to see him and we were anxious to see her brother.
It was easy to see that this KOA campground was less than two years-old. All of our navigation devices knew where the campground was, but they were not aware that there was a new turn lane leading to the campground. We were glad we followed the campground signs and not our GPS units, which wanted us to travel up the road then make a U-turn to turn into the park.
We made our reservations in this campground only a few days before we arrived there and were fortunate to reserve any site there as the park was full of campers. We plan to reserve one of their premium sites along the river when we return to this campground in the future.

We were able to ride our bikes around this campground. We were amazed at how few hills there were there compared to the previous campground we camped in.
We had a good visit with my wife's brother. We decided to visit the Big Foot Museum in Blue Ridge, Georgia that afternoon. They had ample fuzzy photos of Big Foot and video recordings of people talking about their encounters with Big Foot. We also noticed that these first-person recounts of Big Foot sightings lacked how much the people drank before first seeing Big Foot in the woods.

I checked the pressure in Rosie's tires several times while parked in this campground. We were relieved to note that the tire was holding pressure and did not appear to have a problem.
We enjoyed our visit to the Blue Ridge area and would return to this campground in the future when visiting my wife's brother.
Here are some specifics about this campground:
Posted by Cozy Rosie at 11:00 AM 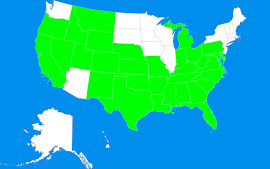 The states shown in green are the ones we have spent at least one night camping in Rosie.

You cannot help but smile when you look at Rosie, our 25 foot Airstream trailer. But Rosie is a late addition to the family and not where this story begins.

After decades of camping in tents, we decided to add a new level of "comfort" in our camping activities. So, we jumped from tents to an Airstream.

The timing was perfect as we are also looking at entering the world of retirement. After more than 30 years of teaching at state universities, it is time to pass the laser pointer on to the next generation of professors. (This will not be a complete retirement because I will continue teaching graduate classes online. All I have to do is stumble into a WiFi signal ever other day to keep the grad class up and running!)